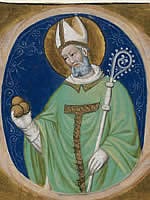 The Legend of St. Nicholas: A Story of Christmas Giving

The Legend of Saint Nicholas

Friday Favorites from 5th and State, You May Be Wandering, Let’s Dish and More »

Hello friends! Thank you so very much for your kin

Prayers needed for my sweet Patches, she is very s

Park your broom and come on in. If you are new her

“I can smell autumn dancing in the breeze. The s

I am blessed, to be healthy, to have a home, to ha

“ I wish that everyday was Saturday and every mo